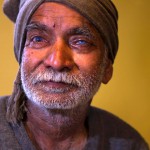 Currently, there is no waiting list for corneal transplantation in the US. In many countries, corneas are not readily available, so Miracles In Sight strives to educate those around the world about the importance of eye donation.Through education and training provided by Miracles In Sight volunteers, our sister eye bank, Dr. Shroff’s Charity Eye Hospital, in India, has given sight to many that once had no hope.

This is one such story.

With his new vision, Pandit has a renewed passion for living. Pandit Ram suffered from smallpox at age 7 affecting his left eye. While playing with a knife at age 9, he was stabbed in the right eye.

His perception of light was there. It was the minimal vision he had in his right eye that has gotten him around since his youth, but it was getting worse.

He had lost all hope until coming to SCEH. Surgery in December of 2010 restored some of his vision. So much so that at age 72 he feels he has a new, second life. Not only has his vision been adequately restored, but so has his social zeal and passion for living.

He is thankful to God Almighty and, of course, Dr. Manisha.