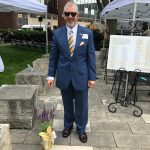 This is my thirty-seventh official year as an eye banker, but in a way eye banking has been a part of my life much longer than that. A genetic eye disease called granular dystrophy type 2 afflicted my grandmother, my mother and four of my brothers. (I was lucky enough to escape the condition.) This is a particularly cruel form of blindness that causes lesions to grow on the cornea, and even after a corneal transplant these painful opacities grow back into the graft tissue. So, my mother, grandmother and siblings all required multiple corneal transplants. In fact, in the early 1950s, before I was born, my mother and grandmother had two of the first corneal transplants performed in America. END_OF_DOCUMENT_TOKEN_TO_BE_REPLACED 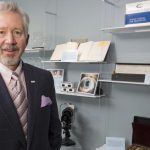 Asked to recount his life’s work, Dean Vavra casually calls it a career he “fell into.” But it is clear that fate played a part, from his growing up with three visually impaired brothers to his serving two combat tours in Iran and Afghanistan. He was an ophthalmological technician Army reservist.

Vavra today is CEO of Miracles in Sight, an eye bank that is already the second-largest in the country and growing apace. The eye bank garners revenues of more than $10 million a year and employs 93 workers, 78 of them at its Winston-Salem headquarters on West Point Boulevard.

Read the full article at the Triad Business Journal.